Home » Blog » Blog » Thoughts » We are no extremists

I had thought of other things to share, but after the terrible events in Beirut and Paris, this would feel off to me. What I do want to share with you, though, is a statement that occured over and over again during my journey, in particular during the many days that I spent cycling and walking along the Tajikistan-Afghanistan border: ‘We are no extremists.’

Imagine a rainy day, when a lonely cyclist pedals into a tiny village in the Wakhan valley, miserably cold in the wind. She stops to gaze at the enormous rain clouds in the valley ahead of her, sighs and gets ready to face those clouds. At that moment, a man opens the door of a lonely house and gestures that she should come in. Utterly grateful, I tell him in Russian that it is very cold outside. ‘Too cold’, he agrees, ‘you should be inside’. I ended up staying with this family for more than a day, treated with the warmest spot in the house (next to the oven), plenty of food and a sleeping place next to the daughters.

During the last months, I was fortunate to experience hospitality that is unknown of in many other parts of the world. People whom I had never met before and with whom I had barely exchanged a few words invited me into their houses, they gave me food, shelter and human warmth. I was welcomed in as a human among humans, treated not like a clueless foreigner, but almost as a family member.

Rare was the case that I had to ask for help. Most often, people approached me in the street, offering tea and a warm, dry spot at least. Those people were far from rich, many of them downright poor. Life in the mountains is harsh, living conditions as well – no running water, oftentimes no electricity, an outhouse somewhere in the fields or none at all. The food I was offered was simple – sometimes only rice for lunch, and then bread and butter for dinner. But it was not out of stingyness of these people – this simply is their daily staple. The luxuary of vegetables or fruit is a rare one, and if they had any, they would offer it to their guest. I was almost coerced to eat more, mostly by the elderly, who remarked that I would need energy to keep going by bike.

Most of these people were used to do hard physical work every day and they knew that getting through the mountains on your own steam is a tough task. Still, here I was, the tourist with the option to get back to her old, comfortable life at (almost) any time, while these people will stay – enduring the harshness of the Pamir winter, facing the deprivations of life in the mountains. And yet they shared with me what they could.

These people were all Muslim, and I was introduced to some of their rites and traditional ways of doing things. It became second nature to me to make a face-washing gesture and thank Allah after a meal, for instance. They never asked me to follow suit with any of their doings, but were pleasantly surprised when I did. In fact, I did not think at all about the fact that we did not share the same religion (I don’t even have a religion as an atheist). In contrast to other places I have travelled, I was also never asked about my religion (or the absence of which). Here, it simply did not matter.

What did matter to these kind people, however, was one thing. One thing that many of them pointed out, repeatedly, and with great fervor. ‘We are no extremists.’ It would have never crossed my mind that they might and I really hope (and am quite certain) that I did not give the impression that I might think that. Still, this was on their minds. ‘We are Muslims, but we are no extremists.’

To put this into perspective, one has to think about the geostrategical situation of much of Central Asia, particularly Tajikistan. The latter shares a border with Afghanistan over the stunning distance of 1344km, the Western part of it being very mountaneous terrain and extraordinarily hard to control. A very long part of this border (1135km) is along the course of the Pyanj river, which I followed for some weeks. Sometimes, the river bed is so narrow, that you can wave to Afghan kids on the other side of the border. In other places, the river was so shallow that you could have simply waded through and entered the other counry – no fences, no guards, no check points.

There actually are a few official border crossings in the area and some villages (such as Ishkashim or Khorog) actually have joint Tajik-Afghan markets in a ‘neutral’ area (e.g. an island in the river), which can be entered by both nationalities without requiring a permit. However, these are closed these days. Some border crossings as well as the markets. What happened? In their advance North, the Taliban came crucially close to the Wakhan. They were 20km from Ishkashim, when I passed through. I did not sleep particularly well that night.

‘We are no extremists.’ This statement can be seen in the light of the terrible attacks in Paris and Beirut, stating the obvious (Islam is not an extremist religion). It can also be seen in the light of the Taliban advancing towards the Tajik border. The people of the Tajik Wakhan are in danger themselves of being attacked by those extremists (I use the word rarely, but with regard to the Taliban, I think this attribute is fitting). In fact, the Tajiks already are under attack of the Taliban – the Tajik form the biggest minority in Afghanistan with more Tajiks living within the borders of Afghanistan (8.2 million, or 27 percent of Afghanistan’s total population) than in Tajikistan itself (6.2 million).

There have been absolutely disgusting bouts of hatred in Europe against refugees from Syria, following the attacks in Paris and Beirut. This reminded me of the Tajiks in the Wakhan. Threatened by the actual extremists, those who are already suffering are accused of being extremists themselves, feeling the need to state: ‘We are no extremists.’ No, you are not. You are humans and you welcomed me as another human. Another human, regardless of ethnicity, religion, or whatever else one might come up as a reason to divide humans into small, artificial entities.

I wish we would live in a world, where this statement would not be needed. Still, this was important to the people I met – having this message out there, in the world. I comply. And would like to add: you are not extremists. You are among the kindest people I have ever met. I was humbled by your hospitality. Your heart-felt welcome has forever changed the way I think about how to approach complete strangers. Give them a smile and invite them for a cup of tea. Don’t think about what separates you, but what you share. Such as being humans. 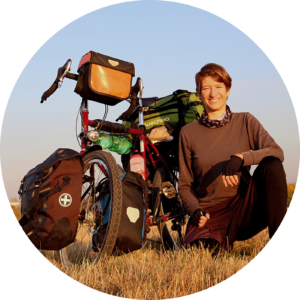